You MUST now:
▶️ Only go out when absolutely necessary for food, medicine, work or exercise
▶️ Always stay 2 metres apart 🚶🏾‍♀️↔️🚶🏾‍♂️

❌ Do NOT meet others outside your household, even friends and family

We’re working alongside our residents and local organisations to make sure that together we can all support our neighbours and communities over the coming weeks and months.

Thank you to everyone who voted Lib Dem in the Lindley ward.

Delighted to have three Lib Dem Councillors working hard in our area. 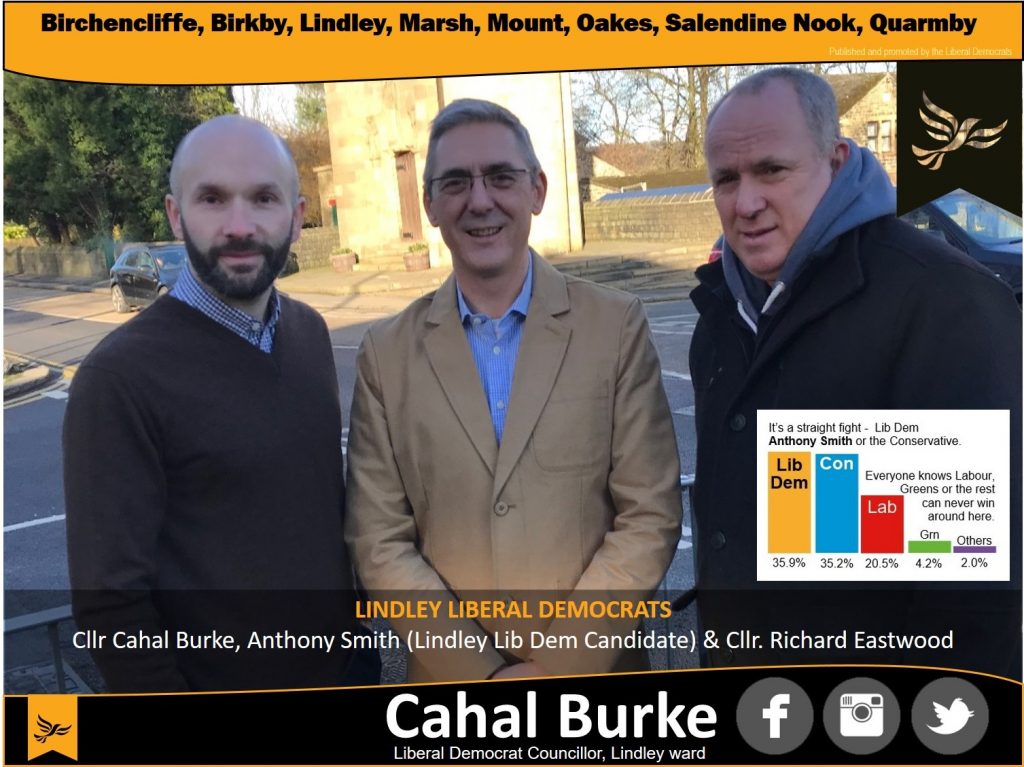 Lindley Lib Dems have selected a new candidate for the Kirklees district elections in May.

The selection follows the decision that incumbent Lindley councillor Gemma Wilson will not seek re-election in May, due to ongoing personal commitments.

Councillor Gemma Wilson, who has been a councillor for Lindley since 2015, defected from Kirklees Conservative group and joined Kirklees Liberal Democrats in June 2018.

In explaining why she is stepping down and is not seeking re-election, Cllr Wilson said:

“I would like to thank my colleagues in Lindley and to the wider party, who have all been great to work with and have been enormously supportive. It’s been an amazing privilege to work with them.

I’ve had to step back at times this year for personal reasons, but I believe that Lindley has an excellent candidate in Anthony Smith, who has my full support.

Of course, I’m looking forward to continuing to work with my colleagues at all the various community events in Lindley. “

Cllr Burke and Cllr Eastwood have paid tribute to Cllr Wilson and acknowledged her support over the course of the year.

“I would like to thank Gemma for her hard work this year. It’s been great to have a united team in Lindley and to be able to work together to support our residents.

We have to look forward now, and I would like to welcome our new candidate.

Anthony lives locally and is a long-standing member of the party. He’s also hugely active in the community and has been working closely with local community groups for a long time. He’s a hard worker and I’m confident that he would be a fantastic addition to our team and to Lindley.

We’ll continue to fight to get a good deal for local people and work together for the people of Lindley ward.” 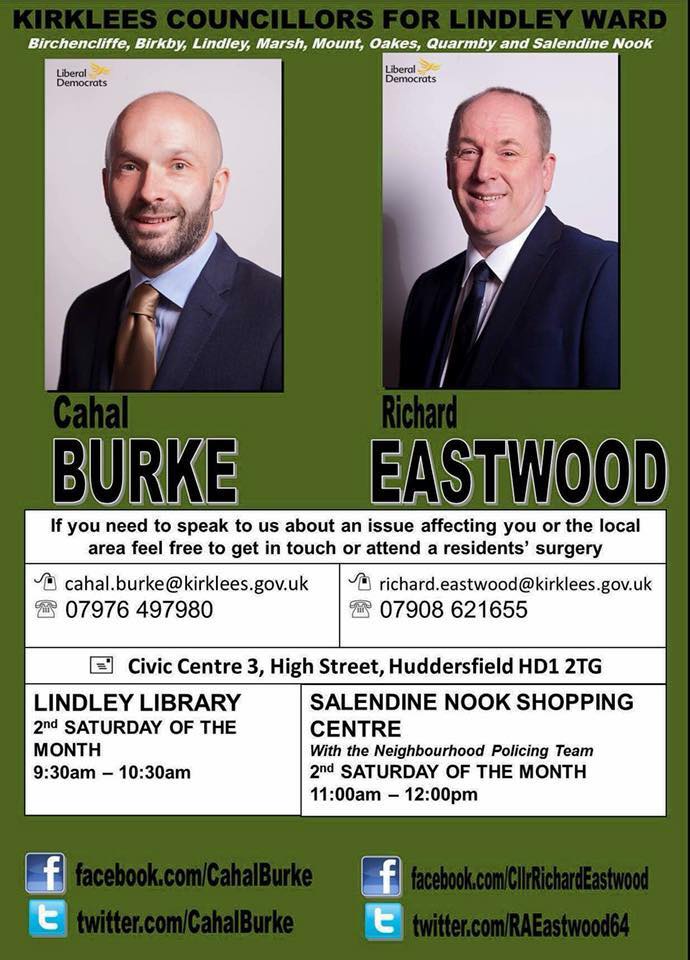 In an effort to better represent the needs and interests of all residents, I hold a residents advice surgery with Cllr Richard Eastwood on the second Saturday of each month.

No appointment necessary, just come along.

If you are unable to attend please contact me using the details below. 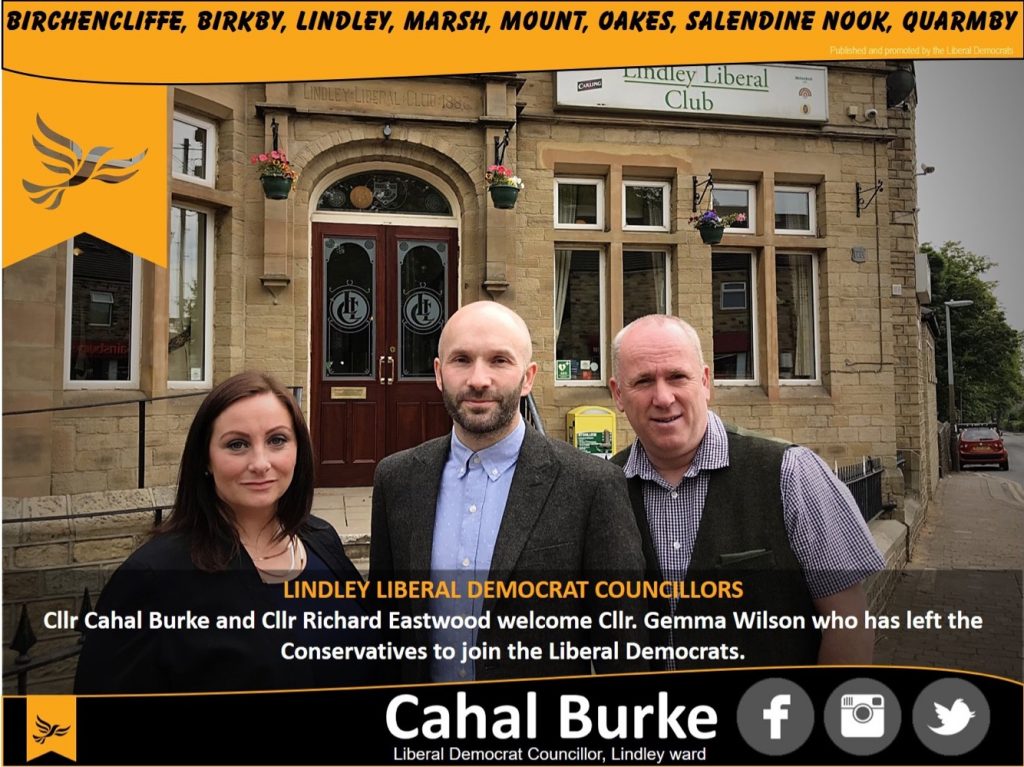 After confirming her decision in writing to Council Chief Executive, Cllr Wilson said,

“I have today taken a positive step forward. As a united team for Lindley I will be working together with Cahal Burke and Richard Eastwood for the good of everyone in the ward. We are battling Kirklees Labour as they cut resources for our communities – such as the library at the heart of Lindley. From Birchencliffe to Salendine Nook and Quarmby to Oakes, we stand united on the issues that matter locally.

“And of course, I remain committed to keeping HRI at the heart of our town. And to fight to save Grimescar valley.”

She was welcomed to the Liberal Democrats by Cllr John Lawson, Lib Dem Group Leader, who said,

“Gemma works for local residents and the communities across Lindley, just like Cahal and Richard. Gemma will be a great asset to the group and will continue to speak out for the people of Lindley ward. I know she will bring a new dimension to the group and our ongoing campaign to win a fair deal for local people from Kirklees Labour.”

Cllr. Cahal Burke, (Liberal Democrat Deputy Group Leader and Lindley Councillor) alsO took the opportunity to welcome Gemma,
“Cllr. Wilson shares our values and beliefs, Cllr. Wilson has joined the Liberal Democrats because we exist to build and safeguard a fair, free and open society, in which we seek to balance the fundamental values of liberty, equality and community, and in which no one shall be enslaved by poverty, ignorance or conformity.

I have seen Gemma in action, working for local people across Lindley for the past the three years. Her determination to get a good deal for local people, her passion on local issues is strong. Along with Cllr Richard Eastwood and myself we will go forward as a united team – stronger, an even more effective voice for Lindley.

The people of Lindley now have three Liberal Democrat Councillors who will champion quality social care, strong local schools, and well-funded services. We are looking forward to working together for the people of the Lindley ward”. 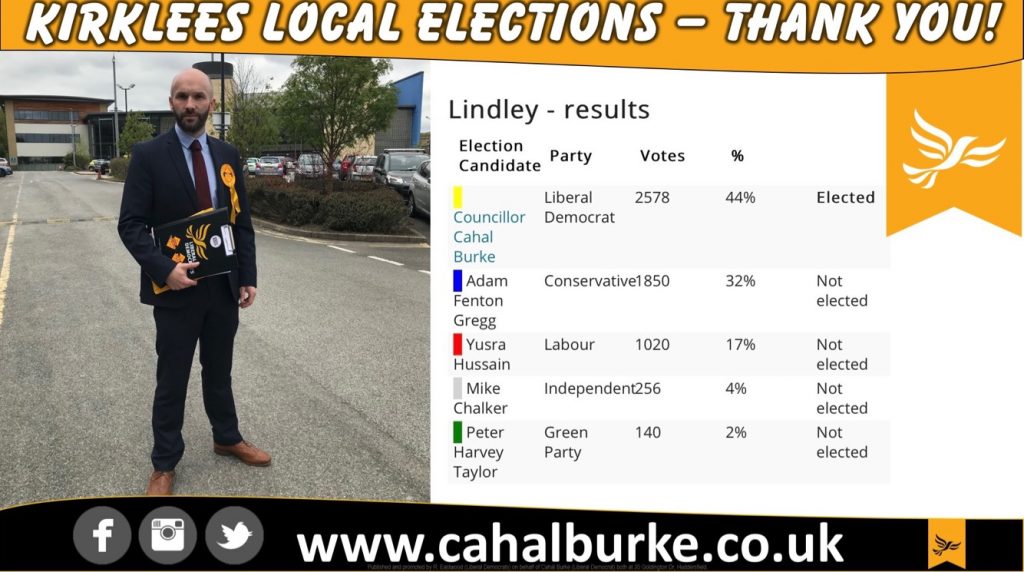 Thank you to everyone who voted for me in the Lindley ward and all those who have worked incredibly hard campaigning & supporting me.

I will continue the hard work with Cllr Richard Eastwood serving ALL the people of the Lindley ward all year round. 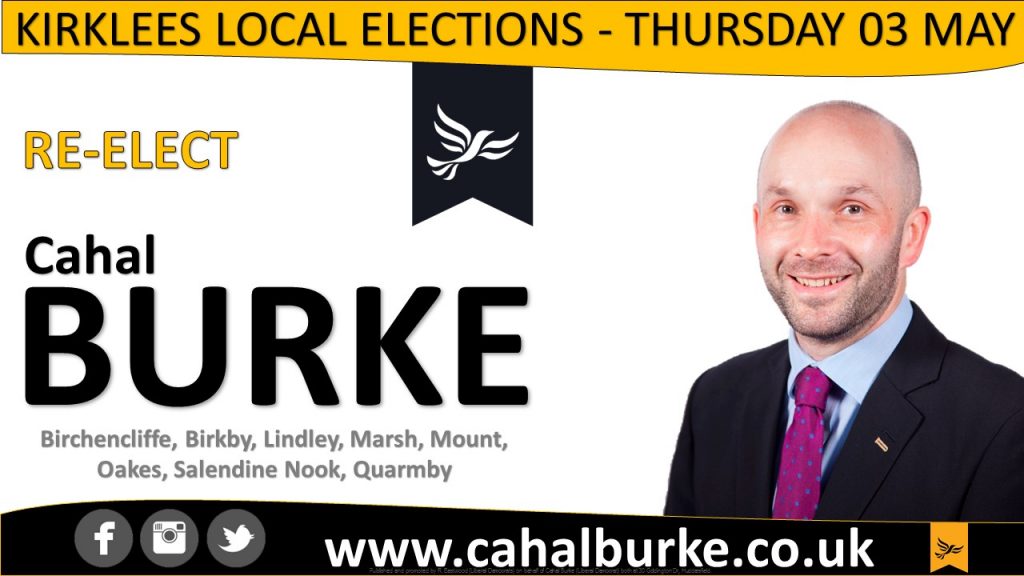 Cllr Cahal Burke and the Liberal Democrats campaign all year round representing the views and concerns of local residents.

 Fighting to Keep Huddersfield Royal Infirmary open and Save Our NHS

 Campaigning to protect our green fields and greenbelt

 Fighting to stop the over development of our area

 Campaigning for a new school in the Lindley area and ensuring we have sufficient school places.

 Campaigning to improve our roads and footpaths.

The other parties think they can just rely on your vote at election time, it’s Cahal Burke and the Liberal Democrats who work hard to make a difference all year round. 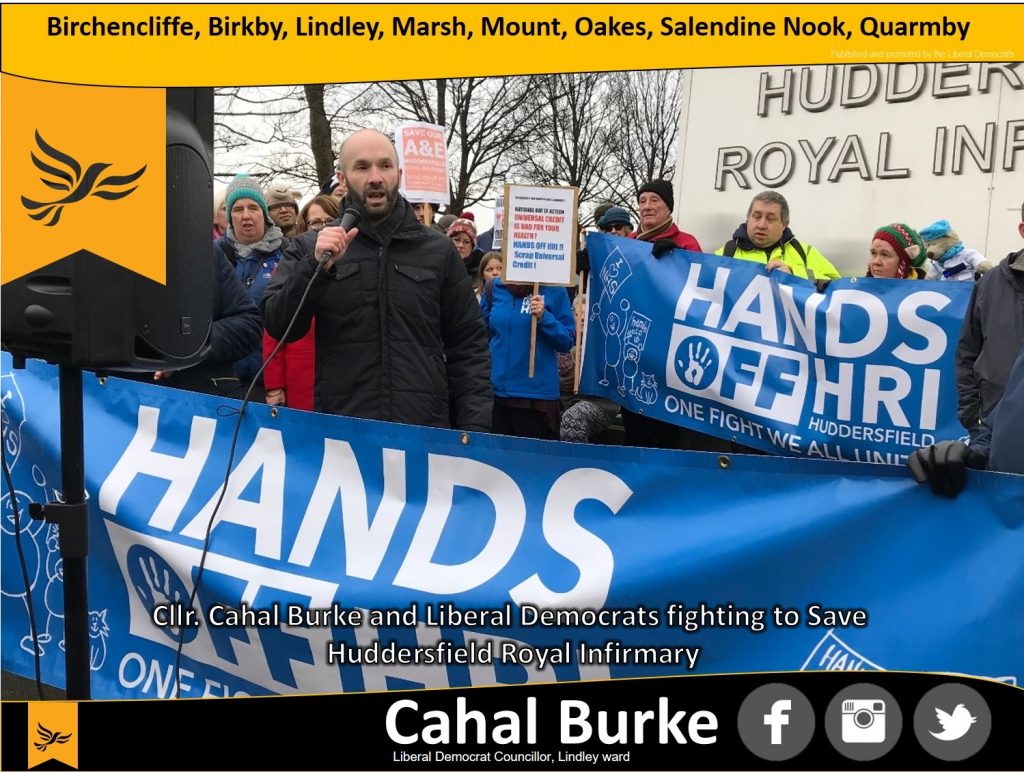 Delighted to attend and speak at events organised to save Huddersfield Royal Infirmary and Save Our NHS, I have been doing so for many years.

We need to all work together locally and nationally to protect our A&E and hospital services.
The Campaign is fighting to save Huddersfield Royal Infirmary, its 400 beds, its Emergency Care Unit and its Acute Services. Greater Huddersfield is a population area of 250,000 people.

The local CCGs and the NHS Foundation Trust (CHFT) are actively pursuing plans which threaten to demolish the existing 400-bed hospital, sell the land owned by the hospital and build a 64-bed day clinic across the road on rented land – and without a full A&E.

The NHS and social care services are in a state of crisis. The Conservatives have left them chronically under-funded, and staff embattled and undervalued, while need continues to grow and patient care suffers.
Liberal Democrats recognise that Britain’s health and social care services are our most treasured national institutions and will fight to protect our Hospital and NHS. 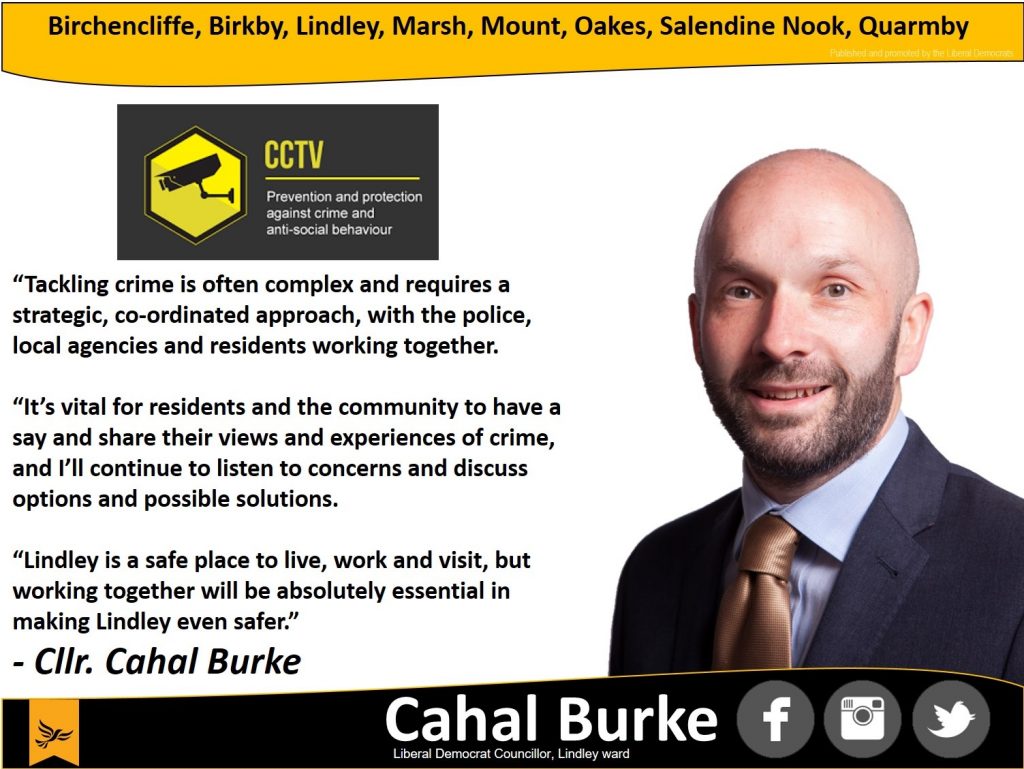 A CCTV camera is now installed in Lindley, any decision about where to position the new CCTV will be based on local intelligence.
Cllr Cahal Burke and Cllr Richard Eastwood secured funding which will allow the portable CCTV camera to be moved up to 12 times over the next five years, focusing on hot spots across the ward.
Kirklees councillor Cahal Burke (Lib Dem, Lindley) believes that the new camera could prove to be effective in deterring crime in the area and will help to trace culprits.
He has worked closely with local residents as well as local neighbourhood police and agencies in relation to crime issues in the area, and hopes the camera will help people to feel safer.
He recently asked local residents about their experiences of crime as part of a survey, in order to get a clearer picture about local issues of crime and anti-social behaviour.
Cllr Burke:
“There were requests from many residents about installing a new CCTV camera, so I’m glad that their voices have been heard and there is positive and definitive action.
“There have also been regular community events organised in the area, and I would like to praise the local police for their efforts and commitment to tackle crime and anti-social behaviour.
“Tackling crime is often complex and requires a strategic, co-ordinated approach, with the police, local agencies and residents working together.
“It’s vital for residents and the community to have a say and share their views and experiences of crime, and I’ll continue to listen to concerns and discuss options and possible solutions.
“Lindley is a safe place to live, work and visit, but working together will be absolutely essential in making Lindley even safer”

A Speed Indicator Device (SID), which warns drivers to slow down, has recently been fitted on Moorlands Road, in Mount.

The device, which was previously funded by the Council’s Huddersfield Area Committee, is portable, and has been moved around different areas of Lindley, including Laund Road (Salendine Nook), Crosland Road (Oakes) and more recently, Thornhill Avenue.

The SID at Moorlands Road has been installed temporarily, while Lindley Moor Road has been identified as a possible location for future installation.

A SID is a vehicle-activated electronic sign which detects and displays real-time vehicle speeds. They are often placed near sites where the speed limit changes, at sites on relatively straight roads and at sites with high collision rates and known speeding problems.

Moorlands Road was previously a 30mph zone, although the existing 20mph speed limit came in to force in September 2013, following a campaign by parents, local school staff and residents to reduce the speed. As part of the scheme, pupils from Moorlands Primary School produced 20mph signs, which were situated along the length of the road.

A ‘Park and Stride’ scheme was also set up a number of years ago, to reduce the amount of traffic on Moorlands Road at peak times, preventing cars stopping on the entrance marking outside the school and encouraging parents to park up a little distance away and make the remainder of the journey by foot.

There are traffic calming measures in place along the road, including flat-top speed humps.

Councillor Cahal Burke (Lib Dems, Lindley), who has helped to secure funding for a number of traffic calming and speed reduction schemes in Lindley, including the 20mph speed limit on Moorlands Road, is confident that the SID will be helpful in reminding otherwise safe and considerate drivers to slow down.

“The SIDs can be really useful in promoting speed awareness and they can be effective in changing drivers’ speeding behaviour and reducing speeding.

The SID has helped to promote safe driving in Lindley, and I’m happy that it has now been installed at Moorlands Road. I’m also hopeful that this will improve road safety further outside Moorlands Primary School, and this is the latest in a number of initiates we have delivered outside the school in recent years.

I am committed to working with residents and partners to make our roads safer.”

Lindley residents who are concerned about speeding can contact Cllr Burke at: Cahal.Burke@Kirklees.Gov.UK. Councillor Burke and Eastwood also hold surgeries on the second Saturday of each month at Lindley Library between 9.30am and 10.30am and Salendine Nook Shopping Centre, between 11am and 12pm. 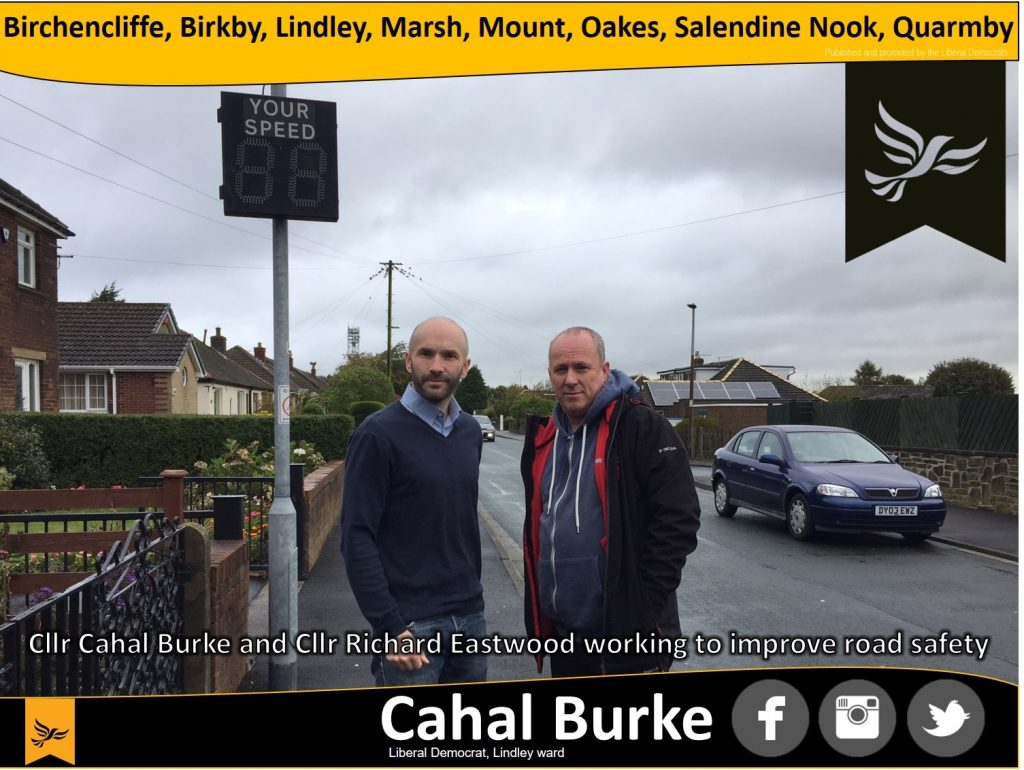