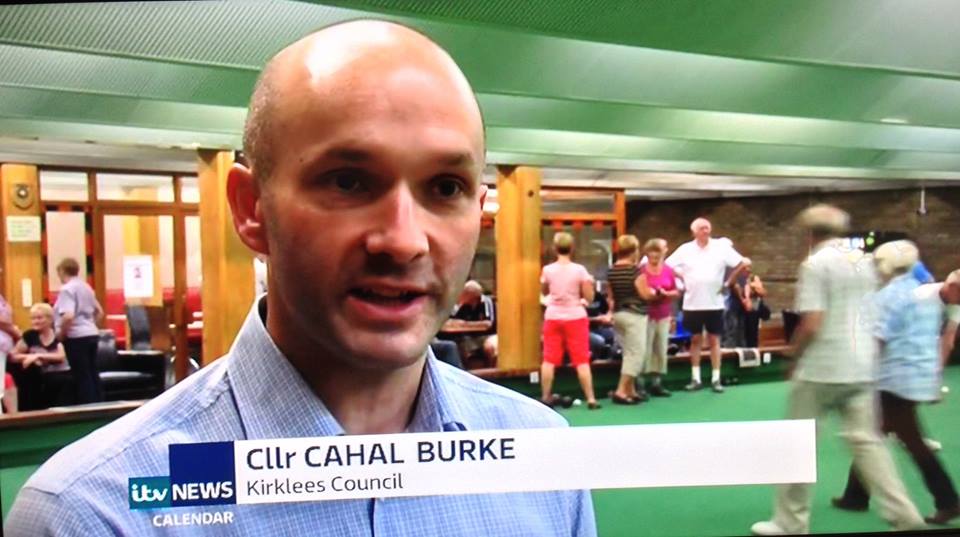 Cahal Burke has lived in the Colne Valley Constituency for over 25 years, most of the time in Lindley Ward. Cahal is a proud father and a very active member of the community.

Having studied Computing at the University of Huddersfield, Cahal went on to complete teacher training before working at several colleges and schools around the West Yorkshire region.

An active Liberal Democrat Party member and campaigner for many years, Cahal was first elected as a Kirklees Councillor for Lindley Ward in May 2010 after which he became a full time councillor. He now combines his full time role as a local councillor with a part-time position at a local college.

A regular attendee at Huddersfield Town and Huddersfield Giants matches, Cahal is also a keen runner. Over the past 4 years Cahal has taken part in numerous charity running events, including half marathons and full marathons, most recently completing the New York City Marathon in November 2014. Yorkshire Cancer Research, the UK Stroke Association and the Yorkshire Regiment Benevolent Trust have all been beneficiaries of Cahal’s fundraising.

Since his election in 2010, Cahal’s professional background has seen him take a particular interest in Children and Young People services in the Kirklees area. He sat on Children and Young People Local Public Service Board, Children’s Trust and Schools’ Advisory Board before becoming the Chair of the Kirklees Overview and Scrutiny Panel for Children and Young People in 2011. Cahal has also done a great deal to expand the quality and range of opportunities s and facilities for children and young people in Lindley ward, securing funding for several schemes including £10,000 for the creation of a new play and garden as a local Community Centre. He has also secured improvements to council owned play and recreational spaces as well as working with local organisations to open up their facilities for use by the community. Cahal has also led a successful high profile campaign to improve road safety outside his local Schools which has seen over £100k invested by Kirklees Council.

Cahal is the presently that Chair of Lindley Community of which he is also a founding member. The Group of local volunteers runs the annual Lindley Carnival which it brought back to the area in the summer of 2008 after a 33 year absence. In 2013 the Community Group also launched “Lindley 10K” a charity fun run and 10K running event which will take place for the third time in the summer of 2015. The Forget Me Not Children’s Hospice and Whiz-Kids have thus far benefited from the 10K’s fundraising efforts with the Huddersfield Down Syndrome Support Group set to benefit in 2015.

Dedicated to the representation of local people, in 2015 Cahal has supported and led several high profile campaigns instigated by local people unhappy at decisions made by Kirklees Cabinet.

Cahal is currently a member on the following committees and outside bodies:

• Secured funding and support from the Local Authority and Local Businesses needed to deliver Lindley Summer Carnival between 2010 and 2015 and Lindley 10K Charity Running Event between 2013 and 2015, benefiting several local charities.
• Secured over £100k of funding to improve road safety outside of local primary schools as well as instigating annual road safety action days and working with the Schools and parents to promote walking to school and improved road safety awareness.
• Established a Public Multi-Agency Contact Point for the Local Neighbourhood Policing Team and other public services in the Lindley Ward, in addition to several initiatives to promote and support better local policing.
• Successfully challenged the introduction of annual permit parking charges in Lindley on behalf of residents living around Huddersfield’s main hospital.
• Lead several high profile campaigns with local action groups to oppose housing developments on green fields in Lindley Ward area.
• Secured funding and improvements to the local Public Rights of Way network in response to the complaints of local residents.
• Successfully challenged Kirklees Councils procedures for the spending of Section 106 moneys, gaining support from Council for a more open and transparent system.
• Helped local groups for older people secure funding for day trips and events to combat social isolation.
• Successfully lead a campaign to protect local A&E services at Huddersfield’s main hospital.
• Supported several groups to challenge decisions made by Kirklees Cabinet including the exclusion of indoor bowlers and bowling facilities at the newly constructed Huddersfield Sports Centre and the displacement of 60 primary age children from their Junior School of choice.

One thought on “About Cahal Burke”