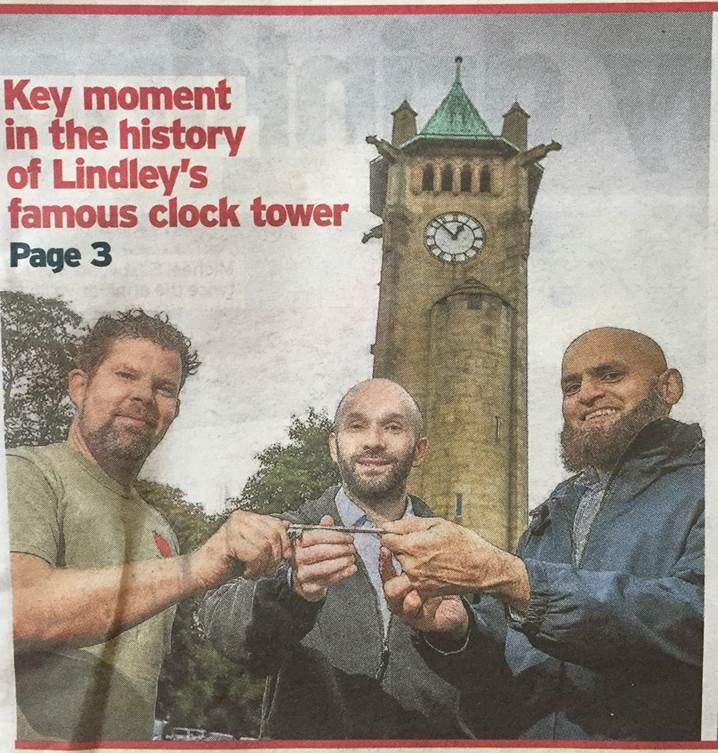 Lindley Community Group has taken on responsibility for one of Huddersfield’s best-loved landmarks, Lindley Clock Tower.

Situated on the corner of Lidget Street and Daisy Lea Lane the tower was previously owned by Kirklees Council, but has now been leased to the Lindley Community Group.

As part of the lease agreement the group will pay the running costs, including the utility bills and insurance. It will initially manage the 83ft tall clock tower on a 12-month contract.

Trustees at the group hope to open up the tower to the public, and are encouraging donations to help meet the running costs.

Any profits from the donations will be used to support future Lindley events, including Lindley Carnival and Lindley 10k.

The tower has previously been open to the public only once a year as part of the Heritage Open Days, a festival which takes place in September and which celebrates England’s architecture and culture through tours, events and activities and allows visitors free access to historic properties.

However, the tower has not been open to the public in recent years, and the trustees hope the agreement will allow them to provide escorted tours to visitors in the future.

The group intends to make an announcement soon about when the tower will be open to the public during the course of the year. It also plans to speak to contact local schools with a view to arranging school visits.

The open day will offer a variety of crafts and stalls, and will take place at Lindley Library between 10am and 2pm. It will also coincide with Lindley Apple Day, a family fun day dedicated to apples, including apple bobbing, an apple hunt and an apple pie competition. This event will also take place 10am and 2pm.

He said: “This is really positive news for Lindley. I’ve been contacted by many residents about opening up the clock tower to the public again, and this lease agreement will provide us with the opportunity to do that.”